What is a VCSEL?

VCSEL stands for Vertical Cavity Surface Emitting Laser, in this case the laser resonator is aligned to the orthogonal direction with respect to the plane of the semiconductor substrate to allow vertical emission of light. It was invented in 1977 by Dr. Iga, the former president of the Tokyo Institute of Technology, and is now used in various fields, including the data communication and sensor applications. It is also prominent in facial recognition technology in cellular devices. Compared to edge-emitting lasers, VCSELs can take advantage of batch semiconductor manufacturing processes for large volume, low cost production. The range of wavelength available from VCSELs is wide, and thus they have found uses in various applications.

Similar to VCSELs, MEMS (Micro-Electro Mechanical Systems) technology is widely used in optical devices such as variable optical attenuators and laser scanners. Santec has developed the tunable VCSEL by replacing the reflective surface of one side of the VCSEL resonator with a MEMS mirror allowing wavelength sweeping at a selectable frequency from few Hz up to 400 kHz. The VCSEL's short resonator length allows it to exhibit single mode lasing over a wide wavelength range at any sweep frequency. Figure 1 shows a MEMS-VCSEL chip manufactured by Santec. A simple configuration combining the current-excited VCSEL and electrostatic-driven MEMS functions as a single-mode, wide-wavelength sweep laser by simply giving the photo chip an injection current into the VCSEL and voltage to drive the MEMS.

Tunable VCSEL as a light source for SS-OCT 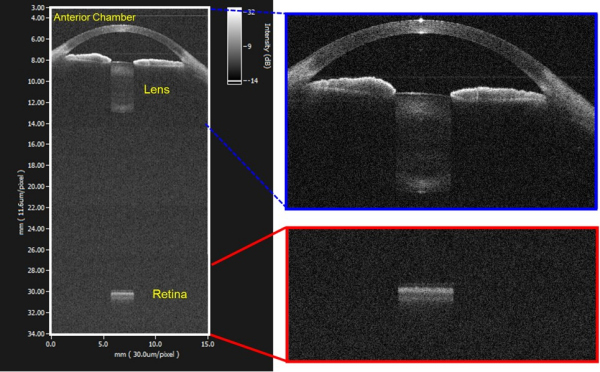 As a further application of the tunable VCSEL, we are also promoting the application of FMCW (Frequency-Modulated Continuous-Wave) type LiDAR (Light Detection and Ranging). The FMCW-LiDAR and SS-OCT systems have many similarities in the basic configuration, and Santec is working on developing FMCW-LiDAR transferring its experience in SS-OCT. The observation distance of SS-OCT used to be about 20 mm due to the limitation in light source performance but by using the tunable VCSEL, an observation distance of more than 5 m is possible. Figure 3 shows an example of this observation. LiDAR can be applied in a wide range of areas, such as automatic driving and machine vision. Santec will make its best effort to contribute to the development of FMCW-LiDAR using the Tunable VCSEL.